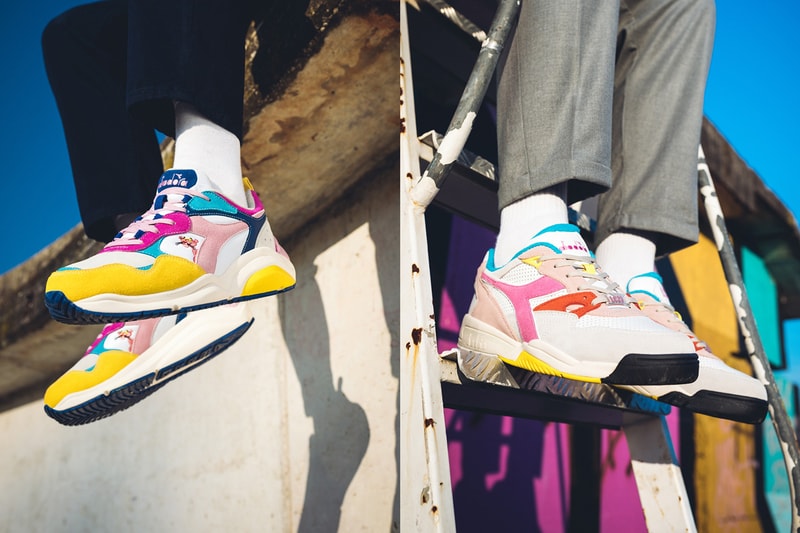 LC23 and Diadora have teamed up for Pink Panther-inspired takes on the Rebound Ace and Whizz Run. A beloved animated pink cat from the ’60s, the Pink Panther’s sly visage and bright colors are familiar to any cartoon fan — so LC23 head Leonardo Colacicco has presented the feisty feline in footwear form with his boldly colored takes on two classic Diadora silhouettes from the ’90s.

Each shoe boasts a classic construction of supple suede and sturdy leather — perforated on the Rebound Ace, smooth on the Whizz Run. Both are then quickly dressed in a plethora of colored accents: each uses heavy doses of pink and yellow, but also include hues like aqua blue, fuchsia, navy and burnished red. The Panther himself even makes an appearance on the Whizz Run, peeking over the midfoot branding in mischievous fashion. Each pair also offers alternating LC23/Diadora hits on its tongues, and is completed by printed insoles with special Pink Panther graphics.

Colacicco is a noted cartoon fan who’s used Popeye for a collaboration in 2016 and Snoopy for a project in 2018, so it seems only right that the first co-branded effort of LC23’s SS20 season is with another comic legend.

The Pink Panther x LC23 x Diadora Rebound Ace and Whizz Run will release at retailers like BILLY’s Tokyo on February 17. Each pair is priced at ¥13,000 JPY (approximately $118 USD).