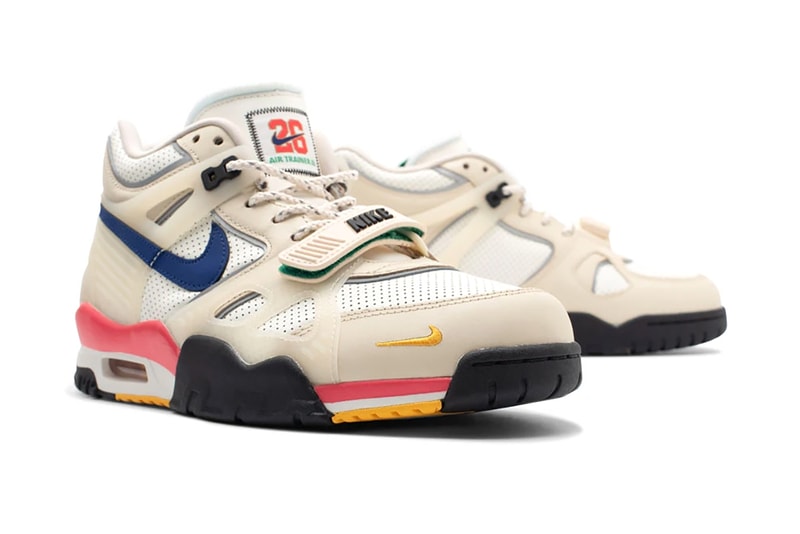 After seeing an early release through Canadian footwear and apparel retailer Livestock, the Saquon Barkley x Nike Air Trainer 3 has now received an official launch date. The kicks are furnished with a bevy of details that reflect the NY Giants running back such as his jersey number, reflective details that nod to New York’s construction zones and a duo of black stripes over the left foot’s lateral Swoosh to nod to his eyeblack. Nike SNKRS has confirmed that these will release on October 8 for $140 USD.

After suffering a gruesome ACL tear injury back in September 2020, NFL running back Saquon Barkley now finds himself back in the lineup for the New York Giants. And to celebrate his return to the gridiron, Nike has fashioned the speedy athlete his own Air Trainer 3 colorway which has just surfaced thanks to Canadian retailer Livestock.

The uppers possess a healthy blend of both neutral tones and colorful accents. The former is seen through the “Pearl White” cages, mid-foot and toe tip overlays and the lower throat straps, along with pure white notes that pop up through the perforated toe boxes, quarter panels and collars, as well as the backdrops of the tongues. Lateral Swooshes are done up with a NY Giants-esque blue, while the forefoot Swooshes usher in hits of yellow and the midsole molds contrast with a bright crimson. Doses of green show face on Barkley’s personal logo on the heels, and the tongues swap out the usual Nike branding for his jersey number “26” in bold orange.

These Saquon Barkley x Nike Air Trainer 3s are available now via Livestock for $180 CAD (approx $142 USD), and it’s likely that Nike could be dropping these in the coming weeks.

In case you missed it, another image of Patta’s Nike Air Max 1 “Monarch” has popped up.