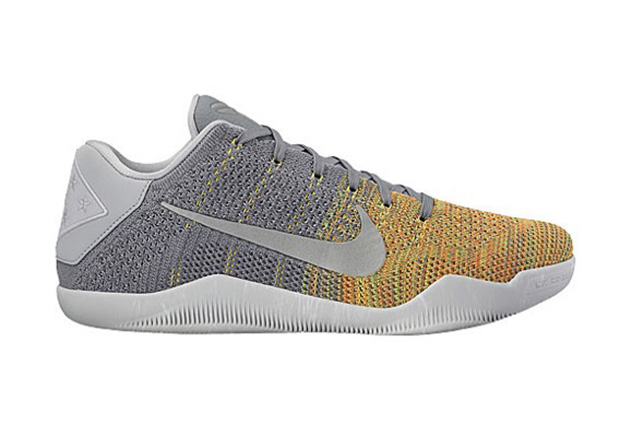 Kobe Bryant‘s storied career may be over, but the Black Mamba is still staying relevant thanks to the help of his latest Nike Basketball World Tour, where he’s making stops in the Netherlands and his native Italy to spread his love for the game to the next generation of international hoopers. Meanwhile, the Swoosh is staying busy this summer by releasing an onslaught of awesome Kobe 11 colorways. While we’ve seen the mesh and fuse varieties dominate the release slate for the most part, the premium Flyknit counterpart known as the Nike Kobe 11 Elite isn’t done just yet. Today we get a preview of August’s upcoming Cool Grey, Voltage Green, and Yellow Strike aesthetic, as the Flyknit gradient has a color blocking of grey on the heel while a near Multi-Color mixture of the two vibrant shades hits the toe. It looks like the Swoosh is still tinkering with unique heel panels, as a general star motif hits this Kobe pair. What do you think of the latest Kobe 11 colorway? Stay tuned for a better look in the coming days and know this pair will be available on August 16th for $200 USD.

Read the rest of More Flyknit Kobes Are Releasing In August