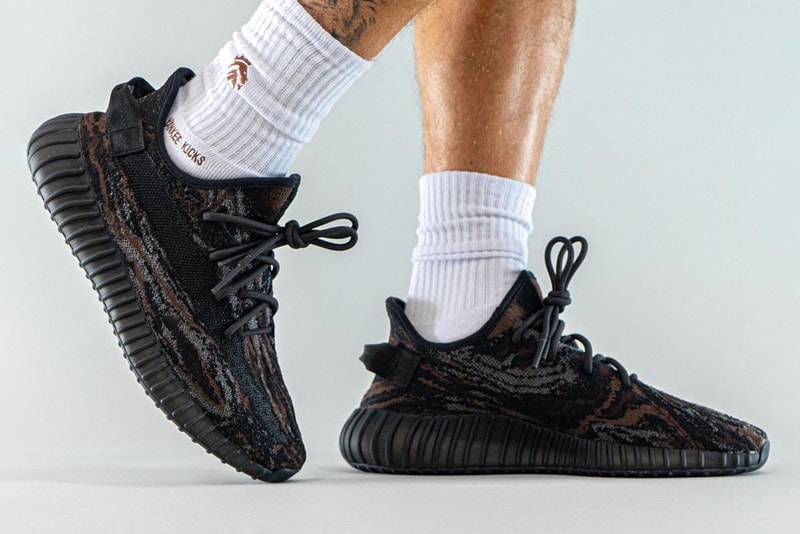 It’s Yeezy Season folks. Kanye West has generated a great amount of noise this week given that he’s on the verge of dropping his new album DONDA, and he’s kick started his roll out with listening parties in Las Vegas and Atlanta, and even made a glorious return on IG where his outfit grid stirred up plenty of attention once again as Nike socks made another appearance. All music aside however, his footwear momentum is only starting to build up even more as on-foot images of his forthcoming adidas YEEZY BOOST 350 V2 “MX Rock” have surfaced.

The pair was first previewed back in mid-April 2021 by YEEZY MAFIA, but now we have a detailed look at all of of its intricate details. Uppers are made with the traditional PrimeKnit constructions, and come decorated with a marbled amalgamation of black, rustic brown and gray hues. Post-dyed monofilament lateral side stripes slightly contrast as they are filled in with a stark black and the laces, liners and heel tabs follow suit. Packed inside the bottoms are the usual BOOST cushioning, all of which comes housed within a ribbed, black midsole.

Early reports are saying that these will be dropping in September, but adidas hasn’t made any official announcements yet. Retail price is set at the standard $220 USD.

In case you missed it, adidas recently outfitted the Ultra4D in “Miami Hurricanes” colors.