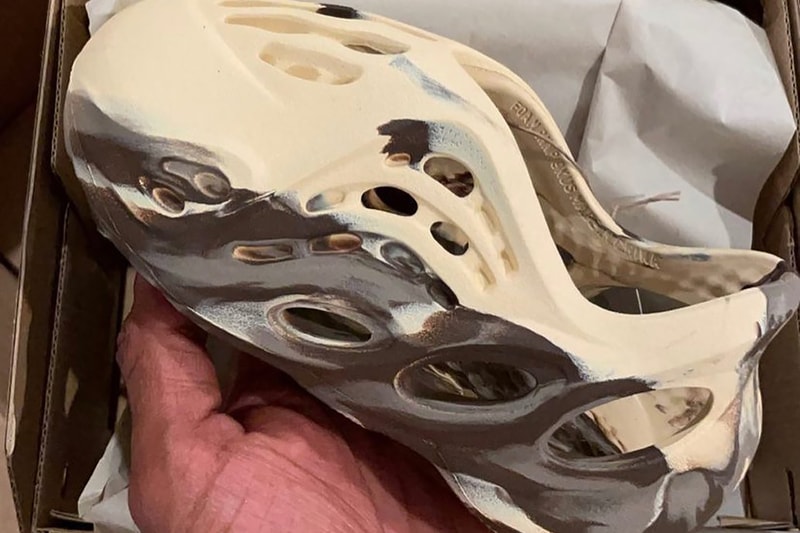 Kanye West is always a topic of conversation when it comes to pop culture, but the attention on him right now is exorbitant as it appears that his latest musical project DONDA is finally seeing an official release to the public. But before the creative genius blesses our ears with a fresh batch of tunes, he’s diverting our attention back to his YEEZY footwear empire to provide an early glance at his forthcoming adidas YEEZY FOAM RNNR “MX Cream Clay”.

The pair shown above is an offering for kids, and was first revealed by Ye’s longtime friend Don C, but you can certainly expect these to also launch in adult sizes when the release day arrives. Like the previously revealed “Mineral Blue” and the already-dropped “MXT Grey” colorways, this impending variation is ornamented with a marbled exterior. A creamy hue is responsible for wrapping most of the ground, but the lower parts of the base and the heels contrast with various shades of gray marbling. As usual, the algae-infused sneaker features its various ventilated holes on the side walls and on the bridge of the foot which provides a light an airy feel for those that step into them.

YEEZY MAFIA has stated in the past that these will be dropping sometime in July 2021 but adidas has yet to confirm this.

Elsewhere in footwear news, the adidas YEEZY BOOST 700 “Wash Orange” has been unveiled.