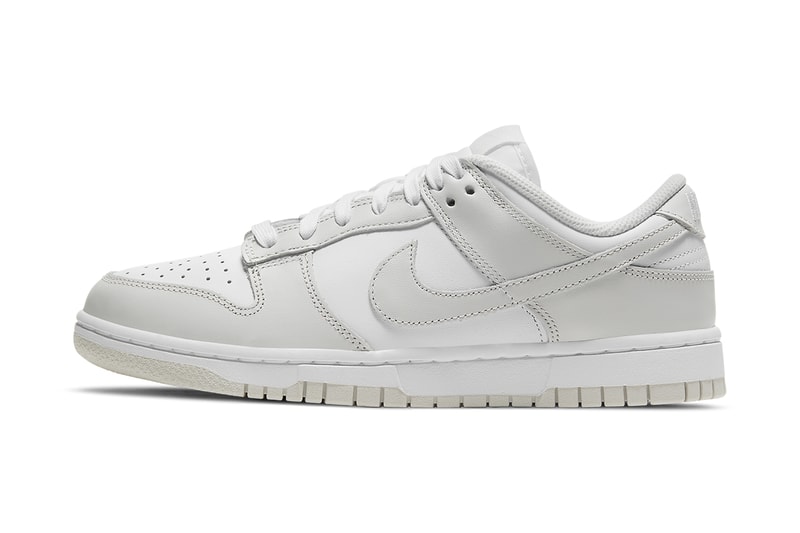 The Dunk continues to be among the most popular silhouettes in footwear, so Nike is capitalizing on that fact by generating a fresh crop of colorways for the Summer season. After being revealed in a vibrant “Green Glow” palette, the Nike Dunk Low is now being unveiled in a minimal “Photon Dust” colorway that will release as a women’s exclusive with extended sizing.

This forthcoming iteration is styled in a similar fashion to the Nike Dunk High “Vast Grey” offering that launched towards the latter half of February 2021, but only hashed down to a lower profile. Leather upper materials alternate with a duo of tones including its nominal hue and white, the former of which cascades over the Swooshes, overlays and the heel overlays while the latter wraps the quarters, toe boxes, collars, tongues and the laces. Interior linings as well as the Nike branded hits planted onto the tongues and heels also come prepared with angelic finishes.

Below all of that, the midsoles are given a clean white exterior and the treading is fully drenched with a “Photon Dust” outer.

Nike Japan is set to launch these on April 15 for the usual $100 USD. A stateside drop hasn’t been announced just yet.

In case you missed it, the Nike’s Air More Uptempo “Bulls” has received an official release date.