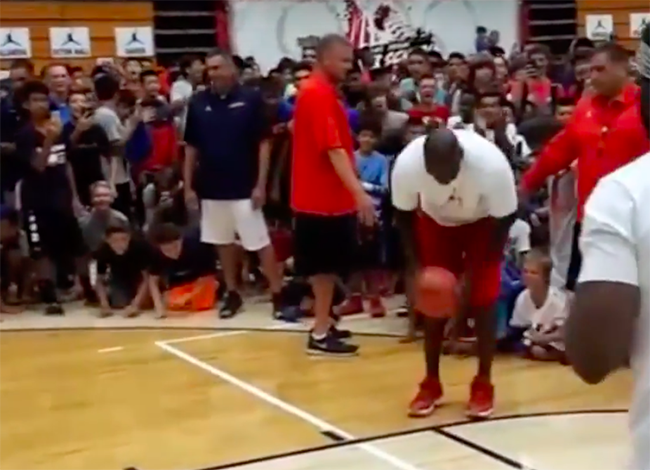 Michael Jordan is still and will always be the G.O.A.T. and recently he proved why. During MJ’s Flight School Camp, none other than Chris Paul made things interesting. He made a bet with Jordan if he missed three shots, he would have to give every camp goer a free pair of Air Jordan’s.

Jordan, who is known to love betting glad accepted the challenge. Of course he rose above and didn’t miss a single shot which started off with some easy ones and then got harder has MJ sunk a deep three ball. Chris Paul did his best to distract Jordan. At one point, he rallied up the kids to smack the ground and even covered Jordan’s eyes as he shot.

At one point, Chris Paul and Derek Fisher tried to win the kids free Air Jordan’s.

#Mj rules.. ?if CP3, makes all his shots… Shoes for the whole camp.. !#MjFlightSchool16

#MJ rules.. if D.Fish, hits all his shots, Shoes for the whole camp… #MjFlightSchool16

#MJ rules… ?if D.Fish hits these shots.. Shoes for the whole camp.. #MjFlightSchool16

Sadly CP3 and Fisher couldn’t win the kids Jordan’s. On the bright side, it probably was pretty cool to witness all this going down.