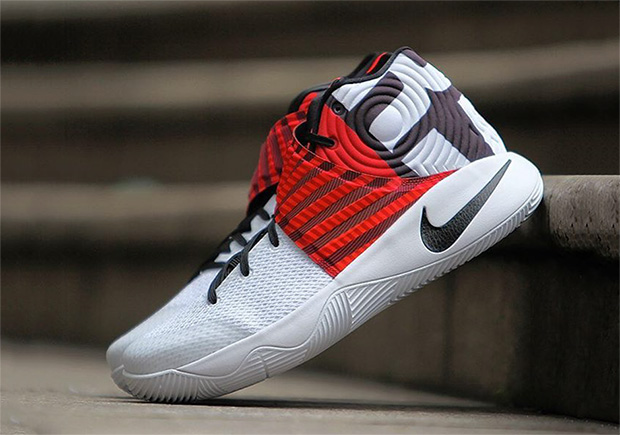 It’s been nearly a week since the Cavs have played a game. With plenty of rest, one has to wonder if Cleveland can accomplish another 4-0 sweep of their next opponent – the injured and tired Toronto Raptors or the equally hurt and struggling Miami Heat. Having Kyrie Irving waiting in the wings is definitely helpful, as the Cavs’ star point guard has tortured the Eastern Conference with an array of crossovers and three-pointers en route to some of the best basketball he’s ever played. Nike Basketball’s latest Kyrie 2 colorway references Irving’s ability to bruise the ankles and ego of any defender guarding him with a vibrant and graphic-heavy take on his second signature. Known as the Nike Kyrie 2 “Crossover”, the pair features University Red and Black caution stripes on the midfoot strap, a heel that spells out ‘Kyrie’ in bold black and white block letters, and a clean white base. While you wait for Kyrie and company to take the floor in the Eastern Conference Finals, this pair can hold you over with a release tomorrow, May 14th for $120 USD. Look for your size right now on eBay.