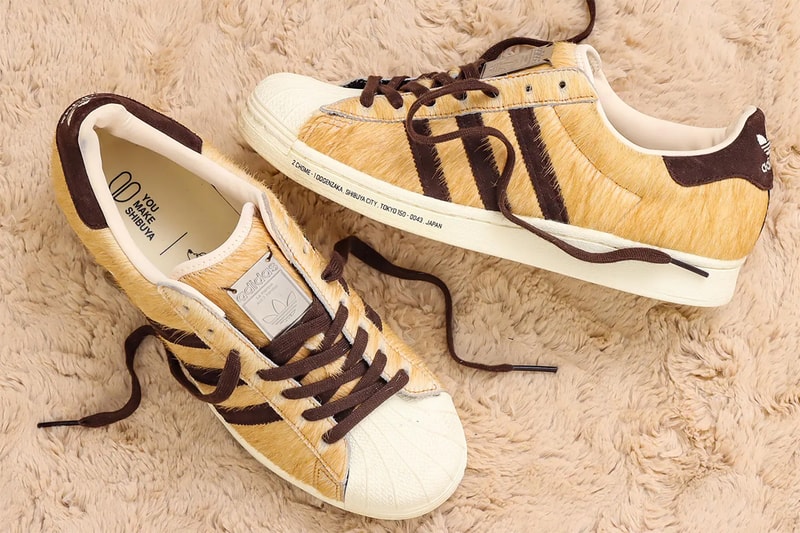 After teaming together to create a Mt. Fuji-inspired Superstar and then debuting a two-piece footwear “Denim Pack”, atmos and adidas are extending its “Shibuya Pack” with its third installment: the atmos x adidas Superstar “Hachikō.” The shoes are meant to honor the story of Hachikō who was a dog that is famously known for his immeasurable loyalty to his owner Hidesaburō Ueno — a former agriculture professor at the University of Tokyo. The legend says that after Ueno passed away in 1925, the friendly canine waited at the Shibuya train station every day for nine years as this was their meeting place on his commute home.

The collaborative kicks are modeled to translate the look of the Japanese Akita. Uppers are designed with beige faux fur materials and contrasted with dark brown stripes, laces and suede heel overlays. The shell toe boxes and midsoles are given creamy applications, the latter of which prints out the address of where Hachikō‘s famous Shibuya statue is located. Other significant elements to point out include the tongue’s branded silver plates as well as the insoles that read “You Make Shibuya.”

atmos is slated to drop these on September 18 for ¥15,400 (approx. $140 USD). In addition, profits from this release will be be returned to the city and support the Shibuya Ward Official Souvenir Project.